Make no mistake: the password is alive and kicking. And extremely insecure...

In this exclusive article on The Master Channel, Michael Boeynaems explains to you why people claiming the password is dead are wrong. Michael also explains how to protect your company from the risks that inherently insecure passwords bring.

Passwords are very much alive. Despite the efforts made to entice users in adopting other authentication mechanisms, the password is still the most prevalent one. Wikipedia has a long list of people who claimed the password was dead. They were wrong.

I won't bother writing yet another article about why passwords are considered insecure and assume you know why. Rather, I want to write about how to counter the risks that passwords bring along given the fact that they will remain alive for several years to come.

Also, I'd like to clearly position three terms that are often heard in access management discussions, and explain how you can put them to practical use:

Next, there is almost no knowledge required to start firing off these passwords against targets at will. Surely, you could implement a lockout mechanism as a countermeasure against brute force attacks.

However, numerous reasons exist to think twice about implementing such a mechanism. Also, attackers may use so-called ‘combo lists’: lists that contain usernames as well as passwords and use those in the hopes of guessing correctly on the first couple of attempts, avoiding the lockout mechanism. The 2019 Data Breach Investigation report published by Verizon confirms the fact that the state of affairs with regards to passwords is very problematic:

> 29% of breaches studies involved the use of stolen credentials (DBIR 2019, Verizon)

So, obviously, using weak passwords presents a big risk. To understand how big of a risk, we can use the brand-new OWASP risk rating calculator. After selecting the correct option for each factor, we end up with a risk severity of 'critical'. My risk assessment of using weak passwords is visualized below. 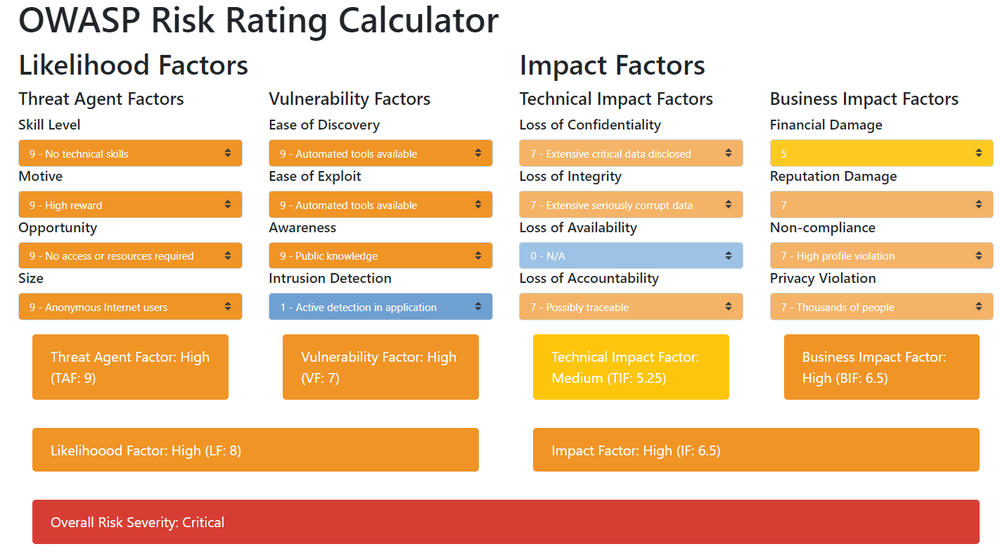 Of course, your estimation of a certain factor may differ a bit from mine. For example, you may feel that a threat agent needs to possess at least some technical skills to execute a password attack. However, I do hope we can agree that the overall risk of using weak passwords is 'high' at least.

While the password is not dead yet, there are a plethora of alternatives available: biometrics, hardware tokens, software tokens, cryptographic devices, ... One could wonder why the password has been and seems to continue being the fittest around.

Part of the answer is provided by Joseph Bonneau, Cormac Herley, Paul C. van Oorschot, and Frank Stajano. In a 2012 paper they compare 36 authentication methods on three scales:

As a simple example let's take the fingerprint mechanism. This is less accessible than a password, especially in environments where people wear gloves of some sort. It also has a non-negligible cost per user, requires server as well as client changes, and often involves the use of proprietary software and hardware (fingerprint readers).

The authors combine all of these properties into the definition of 'deployability', this is why fingerprint scores poorly in this category.

Some types are less trustworthy than others and thus provide a different assurance level. NIST defines three assurance levels (level 1, level 2, level 3). Each assurance level has one or more permitted authenticators that are secure enough for that level.

The full overview of the link between the NIST assurance levels and permitted authenticators is provided in my course Security For Analysts but can also be consulted in section 4 of the NIST guideline.

Theoretically, we are now fully equipped to set up secure access management. But in reality, we have a hard problem since there are M authenticators and N applications that we need to secure.

A change in any one authenticator may impact all applications supporting that authenticator, requiring expensive development rework. Worse yet, this rework may lead to security vulnerabilities when not done properly.

Adding to the complexity is the fact that our application landscape may consist of X technologies which each have their peculiarities when it comes to supporting the NIST authenticator types.

FIDO2 is the successor of the original FIDO standard. The original FIDO standard did not get adopted by many vendors and could not really be called a success. FIDO2 is a different story since it was co-created together with W3C, an international community where web standards are developed. Therefore it is now being supported by many browsers and is quickly gaining a lot of traction.

It is important to understand FIDO2 has been split up in two specifications:
* WebAuthn, now maintained by W3C
* CTAP, still maintained by the FIDO Alliance

CTAP specifies the communication between an authenticator (e.g. a Yubikey, which is a USB or NFC enabled security key used for strong authentication) and a platform (e.g. Windows).

By extension, this spec describes the link between the platform and recent browsers as well. CTAP is relevant only to manufacturers of authenticators, developers of the firmware for these devices, and to browser creators such as Mozilla or Google. Therefore, I will not explain CTAP further in this post.

The WebAuthn part, on the other hand, defines an API (callable via Javascript) which enables the use of strong, public key-based credentials to authenticate users. This API can be called by anyone creating a web application. In other words, WebAuthn enables the use of strong single-factor cryptographic authenticators such as a Yubikey or Windows Hello in an easy, platform-independent manner.

What's in it for me

The impact of this should not be misunderstood: any web-based application can now effortlessly support the plethora of FIDO2 compliant strong authenticators. They can do so simply by calling the APIs as specified in the WebAuthn standard. Before WebAuthn, if an application wished to adopt facial recognition, they had to search for complex and sometimes expensive facial recognition software that could be run in Javascript, or build middleware that users had to install first. WebAuthn will work for mobile apps too, which means that requiring a fingerprint to authenticate in your app will be easier than ever before3!

Contrarily to what the previous paragraph suggests, it turns out that deploying your application and calling the WebAuthn API's in the browser using Javascript is not super-easy. It is easy, but not super-easy. This is mainly due to the fact that something needs to be stored in your database: when using passwords, you need to store a password. When using WebAuthn, you need to store a public key.

Why not put all of that authentication logic in one single server, and have multiple applications trust that one single server? Basically, all applications keep most of their (functional) responsibilities, but one responsibility moves to the central server: authentication. That's exactly what federation means, and it is technically enabled by protocols like SAML, OAuth2, and OpenID Connect.

So now we have a central server that supports password-based authentication. It also supports the WebAuthn standard and therefore M strong authenticators. The only thing your N applications now have to do is simply trust that central server by supporting at least one federation standard: SAML or OpenID Connect (OAuth2).

For those in need of a sequence diagram that ties it all together, here you go. Don't forget to use the demo application (more information at the bottom) to see this flow in practice : 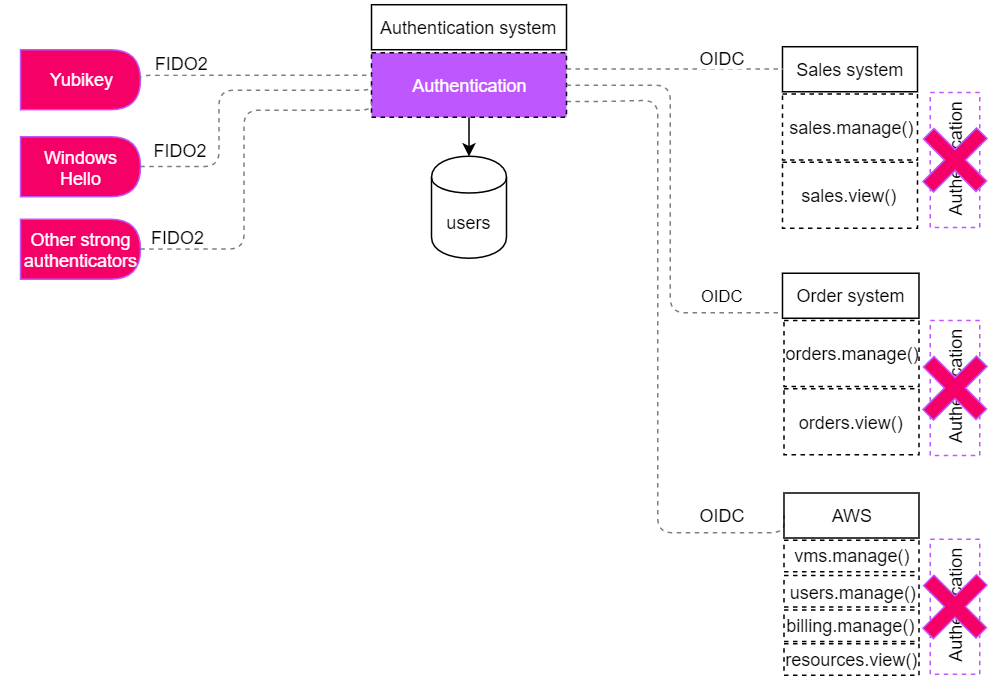 But... what about my passwords?

I started this post by saying the password wasn't dead yet, and yet I moved on to explaining the abundance of strong alternatives to passwords. For all of you out there who use passwords (myself included), there is some good news: the rules became easier!

Remember those nifty password complexity rules that were (and still often are) required when choosing a new password? For years you were using the word password as your, well... password and nobody complained. And suddenly, websites started requiring adding a number to it (passw0rd). Some even required the use of a symbol (p@ssw0rd). Others needed you to come up with a capital (P@ssw0rd), whereas some of them required a length of at least 12 (P@ssw0rd123!).

Do you think P@ssw0rd123! is a strong password? Nope, it isn't. And while I'm not going to go into detail about tricks to come up with a strong password, I do want to dive into the new NIST password complexity requirements.

NIST 800-63b contains what NIST suggests as being the best password complexity requirements. These are:

That's it! No more symbols, no more capital letters, no more periodic changes. All of that can go out of the window.

Let's take our complex password that we came up with before: P@ssw0rd123!. It's definitely more than 8 characters in length. But does it appear in a blacklist? One of the most well-known password blacklists is haveibeenpwned. The maintainer of that website executes those quick Duckduckgo searches that we discussed before for a whole bunch of breaches and indexes the result. 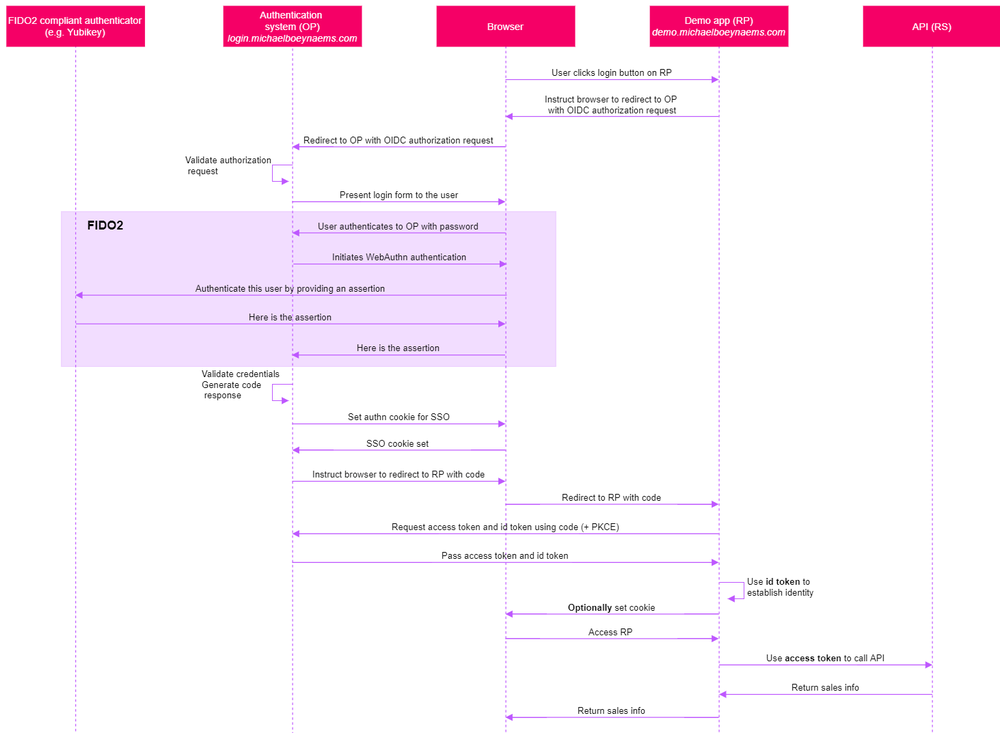 Integration with the haveibeenpwned database

Great, so we have the haveibeenpwned blacklist and some other good blacklists simply there to grab. The only technicality remaining is now to integrate them with our systems that actually use passwords. Luckily, we are using federation which basically means we only have one system storing passwords.

In case you do not wish to be dependant on an external API, an alternative is to download the password list and use it as a blacklist6. An example of Active Directory is here.

Putting it all together

The demo application puts all considerations into practice:

Trying to register using our weak password (P@ssw0rd123!) will, therefore, produce an error:

On top of that, the demo application supports WebAuthn and therefore Windows Hello, Yubikeys, etc. This WebAuthn capability is configured as the second factor. We could restrict the authentication server to only accept WebAuthn authenticators which are multi-factor by design and then get rid of the password! In that case, the password would be dead. But, for now, I've kept it alive.

I guess I must admit that the title of this post may have promised more than what I delivered. This post mainly talked about authentication. Authorization on the other side of the access management coin discussed more in detail in my course Security for Analysts.

I want to see all of this in action

Take a look at the demo web application. It uses OpenID Connect as federation protocol, WebAuthn (FIDO2) as authentication protocol, and complies with the recent NIST 800-63B password guidelines thanks to the haveibeenpwned database of compromised credentials.

To be able to register, you need a recent web browser and a FIDO2 certified authenticator.

The source code for the demo application is on GitHub.

Security is both a business and an IT concern. Learn the cyber security basics every digital transformation professional should master.