Have you ever been confronted with resistance as a business analyst? "You don't know how things work here." "The old system worked fine." "We've been doing it like this for more than 20 years now, why change?".

Gaining support for change is not easy. Letting people take action is not easy. The Rose of Leary is a practical model that can help you to achieve this. Helen uses a practical example to illustrate how you can put it to use in your day-to-day life.

People that are confronted with change react in different ways. This change can be a variety of things: implementing a new system or procedure, restructuring processes,... Achieving support for change requires insight into the different possible reactions of people and knowing how you can influence them.

The Rose of Leary is a practical model that can help you with that. Psychologist Timothy Leary found that people mostly react in a predictable way. He placed these patterns of action and reaction in a model: the Rose of Leary. Mastering this model will help you to better understand interactions and achieve better outcomes in situations of resistance.

The model: a summary

Based on this, it is possible to distinguish 4 possible positions for communication in a simplified model: 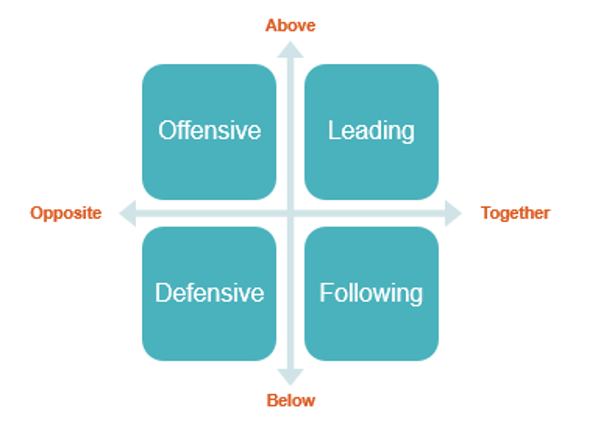 How to use the model?

The Rose of Leary is designed to increase your understanding of interactions. This allows you to better understand others and to read resistance reactions. Communication follows an action-reaction pattern and can be described using a simple set of rules.

Logically, when behavior provokes similar behavior you can take control of behavior. Simply put, if you are not satisfied with the mutual communication, you can consciously choose a different position and show different behavior yourself, thereby breaking the pattern of action-reaction.

It almost sounds too simple so let’s take a look at an example.

An organization has asked to implement a new CRM system. You are giving a workshop to the employees who have to work with this system. During the break, one of the participants approaches you and tells you he really doesn't understand why a new CRM system needs to be implemented. “By the way, the old system is more convenient to use.”

You, of course, are a believer in the new CRM system and mention a number of advantages of the new system.

To every advantage you mention, the participant responds with "yes, but...".

Annoyance creeps up because of his reaction and at some point, you blurt out: “This system has been implemented, so you'll have to use it”.

While most of us can see that this reaction is not ideal, it is important to understand where it comes from. Analyzing this situation in terms of the Rose of Leary leads to the following insights: 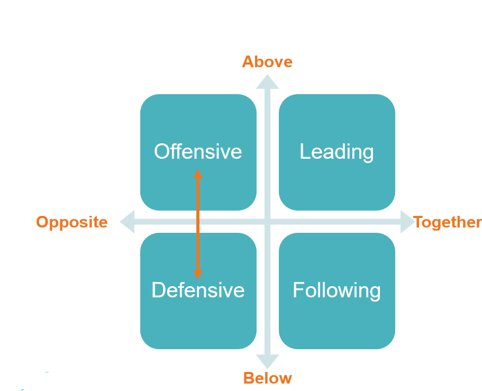 Is there something you could have done to make this interaction more positive? If you master the Rose of Leary you’ll notice there is something you can do. As an analyst, it will be your job to break the action-reaction pattern. Leary tells you that you should position yourself on the same level of dominance and on the opposite level of collaboration behavior.

In this situation, the participant shows resistance and reacts defensive (opposite - below). According to the theory, you would have to illustrate following behavior to break the pattern.

This, again, sounds quite simple, so let’s take a closer look at two possible answers to solve this situation: 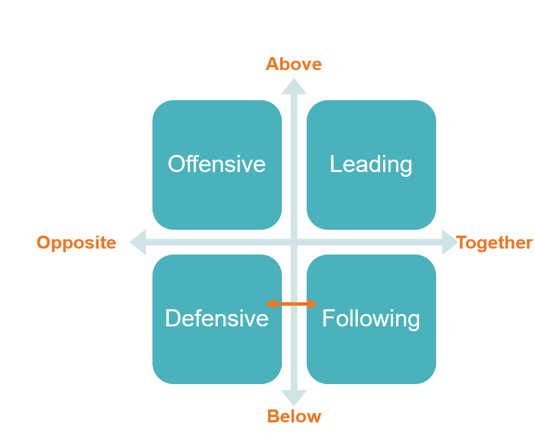 Doing this will likely pull your conversation partners from opposite to together behavior. This will lead to a different type of conversation: one where there is an openness and willingness to listen to a new proposal. Doing this will improve the implementation and acceptance of the new system because you have passionate employees that are thinking along.

Using this model in your day-to-day life requires some practice, but done well you can turn resistance into your friend.

How to tell better stories

Solving the challenges of a business analyst visually.

It is in noticing resistance that change starts to happen